Electronic Data Interchange (EDI) is the exchange of transactions between computer systems to achieve a specific purpose. Transactions are often simple text files using tightly standardized formats. In some cases the exchange of data is entirely virtual.

Traditionally, EDI has referred to transactions in ANSI X12 format. But today EDI has evolved to include many routine events, like your dentist inserting an appointment into your calendar by sending you a file, to which an acknowledgement is returned to their scheduling system confirming the appointment. It is likely that you might have pushed a button or two to make that happen, but EDI often happens in an entirely automated fashion, machine-to-machine.  For example, in the defense world, there are Vendor Managed Inventory systems which allow the Government to automatically look into inventory managed for it by contractors by talking directly to their VMI systems.

ANSI-X12 is a form of EDI that has been around for more than thirty-five years.  Highly standardized in terms of format and method of interchange, X12 was formalized by industry under the auspices of the American National Standards Institute (ANSI).  Industry committees that have rigorously defined more than 300 transactions, representing nearly every conceivable exchange of business data between computer systems. 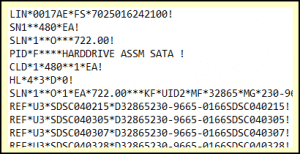 Use of such standardized transactions and systems allows for the automatic routing of transactions from one system to another through the use of Value-Added Networks (VANs) and increases the likelihood of the transaction being understood, while also provided a means of indicating success or failure of that.

Wide Area Workflow (WAWF) makes great advantage of EDI, allowing contractors to submit Receiving Reports, Invoices and RFID updates electronically, without the need for a user to enter the data manually into a web site. Which is good because doing so is slow, tedious and a common source of errors. And since the user is likely transferring data from one computer system to another, it is better to let the computers just talk to each other. EDI formalizes that process through the use of standardized transactions, such as X12.

There are four forms of Electronic Data Interchange principally used in the defense supply chain:

It is possible to conduct business with the DoD without ever using EDI. However, any kind of automation will rely on one form of EDI or another. Robust defense supply chain automation systems, such as MIL-Comply, use all of them.